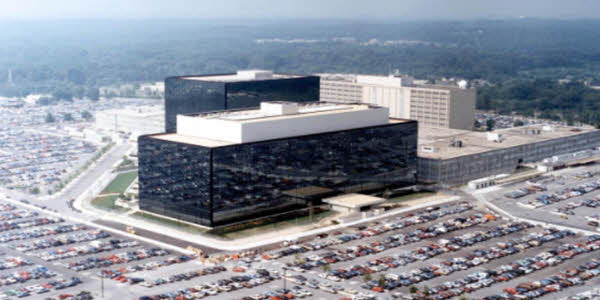 All the surveillance these days come from George Orwell’s 1984 logical extension. From churning out the propaganda to telescreens spying, everything – and surely are violating the privacy rights.

Media during the years found out that NSA (National Security Agency) uses special software for voice recognition and for detecting locations.

They use it to spy on anyone they want, simple. What’s more concerning, NSA, for over more than a decade records and gathers private calls for identifying individuals, based on their voiceprint.

RT.com journalists discussed among William Binney, ex NSA whistleblower (and the technical director) and with Richard Barbrook who is an academic at the Westminster University.

Barbrook told RT, in 1984, George Orwell had an idea that a part of the population had the telescreens and where TVs could spy on you and additionally provide you propaganda – being a “logical extension” of this.

A thing to note here is, if even back in 1984 the government could spy on people via their televisions – just imagine what they can do in 2018?

NSA voice recognition tool shows that our voice assistants can leak the data too, in future.

We find it very scary, even if I have to guess that.

Nowadays, things are even open than those days. Because we have phones, tablets, laptops – and most phones have voice assistants like Siri, Cortana and many other that carry tons of data of you.

Barbrook continued that people now are paranoid when it comes to voice surveillance or other systems of surveillance from thirty years ago, however, now they accept it.

Sneaky thing from NSA is that they use the commercial division to get what they desire.

Subsequently, a response seemed not so sincere (at least for general users like us) from Barbrook after he was asked – about tons of collection made on voice recordings by the NSA.

Where he said that they are not tracking people; and, it is just a blanket surveillance nothing to be afraid.

He also added that people don’t need to say a thing regarding the fact that police chases pedophiles or terrorists.

Unfortunately here it is not just about targeted surveillance, yet all of us are a target – and tons of data is being collected by NSA (and scanned). Everything is happening on the idea to find all suspected things.

Barbrook notes that for NSA the whistleblowers are a priority. Also, they look to hide from people whatever these guys do.

The former whistleblower and technical director stated something like this;

The technology is developing very fast and so it treys to figure things in a mass of data. Now things are becoming itchy when you want to access large amounts of data.

Binney noted that would be very effective to use a tool to identify a specific person. Still, this can be quite hard if you are looking to locate it in a city with more then 200,000 inhabitants.

So, this could be a problem. He, also added that technology isn’t as accurate as people believe.

The former whistleblower was asked about the impact of this and if the NSA technology can identify dissenter within the agency.

He responded that if a whistleblower talks about NSA spying secrets and more precisely about a specific program. Then to identify him, you only need to pick the voice print and look into the agency people- which for sure, will get a positive result.

Diplomatic fact declared by Binney is that he also believes that by using this kind of technology you are invading the privacy right. But, except the person for whom you have reliable data regarding any possible infractions.

Here again, the question comes – then why NSA tracks and spy on everyone and not just the suspects?

NSA had a massive impact on George W Bush’s administration; since they deleted surveillance data regarding wiretapping. The US spy agency allegedly removed the controversial G.W Bush’s spying program data.

The administration had an intriguing act over the 9/11. Since they declared they need to free some space up on their drives, which they did, by deleting questions regarding the attack.

However, the court had a word to say there – they sent an order to preserve data for further examination.

Binney declared a fascinating fact on the data in question being that this kind of data disappears pretty often. In this way, he says they have a backside because of which in case of an investigation, no data will gets to anyone else.

Binney added the intelligence community does not mind if whistleblowers lie to the people of US or in front of the Congress, or even to the president. That doesn’t matter because no accountability is there and NSA has vast powers.

A fascinating fact is that Chuck Schumer (a US Senator) advised Trump to not think of attacking the intelligence community. “Because they’ve got six ways to Sunday to get back at you,” Senator said to Donald Trump.

Binney concluded: This is how they do it!

For this part, for now, I want to start imagining you are looking for somebody in the world. Let’s name him Zed. You know him very well, as he knows you. However, you reached a point where you don’t know where he is hiding.

Now, how you can find him?

The first chance of finding him can be, facial recognition. This is possible in airports (as they scan cameras against everyone’s face), or maybe matching pictures from social media. Still, you would hope he’ll walk by a camera.

The second chance could be his voice, which is a way better idea. You know all of us carry a phone or maybe make a call from a public phone, every day – if not every time.

Even if he (Zed) tries to hide from this kind of things, yet there are many microphones in the world he could encounter.

Possibilities are too great in case of the voice recognition. It is going to be a matter of time until he passes by in the background of a friend who is talking to the Echo or Google Home.

A similar idea (the voice recognition tool, Blanket Surveillance) of chasing people is with NSA. This secret came to light back in 2004 when a program named Voice RT, was able to match speakers to a voiceprint (a very important aspect of finding Zed) – and also creating standard transcriptions.

The system began functioning in 2009 over the Pakistan army chief. Even if there where only a few voice clips for building a good model.

The same happened in 2007 on 100 Iranian delegates with phones. Why? Because the President Mahmoud Ahmadinejad visited New York.

Now the question is, are Amazon and Google doing enough for protecting users?

It is obvious that NSA has access to USA phone infrastructure. A deal that came from the Snowden documents.

However, the recent years had a boom when it comes to voice assistants as in Google Home and Amazon Echo.

These services have thrown a nice flood of data in the clouds, from where NSA would be more than happy to intercept the talks.

These voice assistants retain data, yet only after they hear “Alexa” or “Okay Google“. Here police can access the data in case of a possible crime or burglary in your home.

But in this case, NSA’ system will go for a voice recognition instead of only some words. By this said, the wake-word is not such a big issue. In case one can send all the data to Amazon’s or Google’s servers, in exchange, he can get a full profile of the owner.

Since speech-to-text algorithms are pretty new, Amazon and Google keep the audio data in a cloud. In this way, they can have a catalog of the transcription errors.

Good thing for users is, both, Amazon Echo and Google Home start retaining data only after hearing their wake words (Alexa and Okay Google).

So unless the security researchers at NSA can break past the wake word safeguards of Google and Amazon voice assistants, they cannot make them record everything.

By this, we see why NSA is so tempted on the tech giants.

Amazon on the customers’ side

The company is not providing any customer information without a legal demand served to them.

An article from The Intercept speaks how the program merged into NSA operations. Subsequently, nobody from Amazon or Google said this is possible. Yet, it is not wrong to be suspicious here.

Even if an order like this might come to such a company; for sure, the order would consist of special instructions for the firm to not disclose what they would be doing.

Until now, transparency is little to be noticed as to how much data NSA gets from the voice assistants.

Amazon has been acting pretty shifty when listing requests regarding Echo data, in a recent report about transparency.

On the other hand, Google treats the voice recordings as a usual data of users – and doesn’t really care about specific requests about Google Home.

Recently, an Amazon representative stated: “Will not release customer information without a valid and binding legal demand properly served on us”.

How much data the personal assistants retain?

A good question here would be, how much data home assistants retain – right?

Well, technically, there are no reasons to store audio data by defaults – at least not of every request. Especially if that poses the privacy risks.

If these tech giants (Amazon and Google) really want to reduce such threats, they need to stop lurking on requests made by particular users. They better take Siri as an example, adding the anonymous identifier.

Alternately, they could keep texts instead of the audio – or maybe start developing speech-to-text chats on a device itself.

However, NSA powers are not the things that the tech giants had in mind at the time of creating Home and Echo. Both Amazon and Google had good intentions when they created these home assistants.

But, they never thought the programs created to assists users could become a perfect tool for surveillance. Likewise, they probably had no idea that someone’s voice could be something they would need to protect.

Now, what happens moving forward is pretty much dependant on Amazon, Google, and their customers.

Sure we are on the same page when it comes to this. What we at FreeSpyPhone plead is for freedom and the craziness over control that seems to come from NSA.